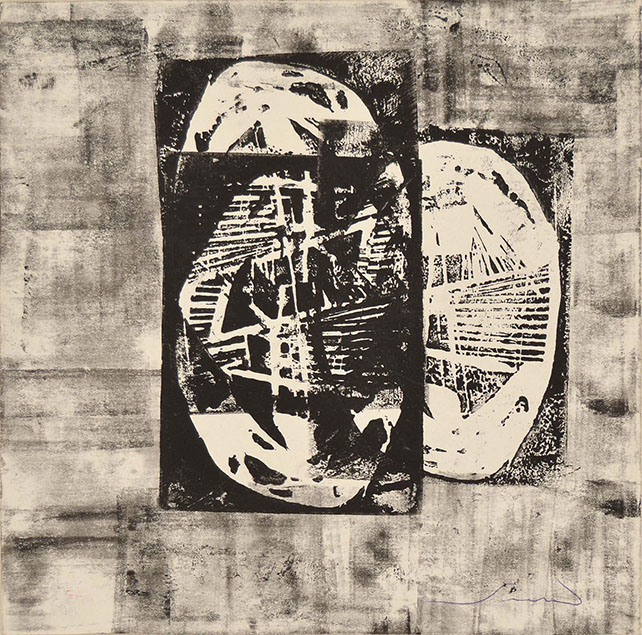 After his studies in Genoa and then at the faculty of architecture in Milan, and having already started his career as a painter, Scanavino moved to Paris in 1947. This experience proved to be inspirational. In his stay he met poets and artists, as Edouard Jaguer, Wols, Camille Bryen. The Parisian experience will prove to be fundamental in its stylistic path, the main influences being those of Post-cubism, Picasso and Abstractism. In 1950 Scanavino exhibited at the Venice Biennale, arousing the attention of the critics and he decided to devote himself completely to painting. In 1951 he had a two-person exhibition with the sculptor Sarah Jackson at the Apollinaire Gallery in London. During his time in London, Scanavino met Philip Martin, Eduardo Paolozzi, Graham Sutherland and Francis Bacon.
In 1952 he worked at the Marzotti's Ceramic Factory in Albissola Marina where he met and befriended many artists, including Lucio Fontana, Asger Jorn, Corneille, Roberto Matta, Wifredo Lam, Giuseppe Capogrossi, Enrico Baj, Sergio Dangelo, Roberto Crippa, Gianni Dova, Agenore Fabbri and Aligi Sassu. In this period he met also Carlo Cardazzo, destined to become his attentive dealer. In 1957 Scanavino met the young Enrico Crispolti, who will become one of the most attentive scholars of Italian and European Informal Art. With the critic Scanavino kept a long correspondence that highlights the link of the artist with the pictorial language of European informal art, particularly with the lesson of Wols and with the suggestions of Bacon and Paolozzi.
In 1962 Scanavino bought an old house at Calice Ligure, which eventually became an atelier and in 1968 he moved his studio there, creating a small community with others artists. In 1971 he survived a hard surgery. The recovery signaled the start of a new creative wave in his painting. He travelled in Belgium, France and Germany but he remained living at Calice Ligure. Between 1973 and 1974 the Kunsthalle of Darmstadt exhibited a huge exposition of Scanavino works that, with some variation, was also shown in 1974 at Venice's Palazzo Grassi and Milan's Palazzo Reale. In 1982, although in failing health, he kept working and exhibiting in public and private places, until his death.