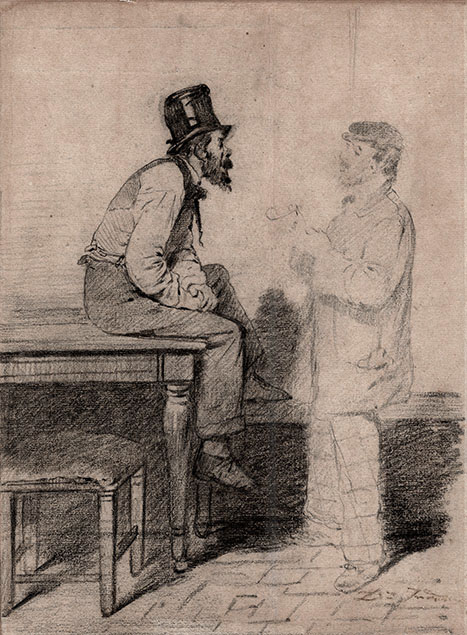 Black chalk, on laid paper with indistinct watermark. Signed at bottom right D° Induno. 318 x 233 mm.
Carefully observing the verso of the sheet, we can notice that all the contours of the man sitting on the table were traced with a stylus for a pictorial transfer.

A student of Sabatelli and Pompeo Marchesi at the Brera, Induno was influenced by the culture of Francesco Hayez and Pelagio Palagi. After beginning as a history painter, he turned in 1844 to themes from daily life, as proposed by Pietro Estense Selvatico in his essay Sull'educazione del pittore storico odierno italiano (1842). Skilled in chronicling domestic life and misfortune with detailed realism, which recalls Ferdinand Waldmuller and Biedermeier painters, Induno was appreciated by the public and more conservative critics. Because of his liberal political beliefs and Risorgimento activities, he fled in 1848, with his brother Gerolamo to Switzerland and then to Florence, where he met the Macchiaioli and experimented with new styles and patriotic theme. In 1855 his painting Pane e Lacrime was exhibited at the Exposition Universelle in Paris, where it won a prize, was praised by Théophile Gautier, and purchased by Hayez.