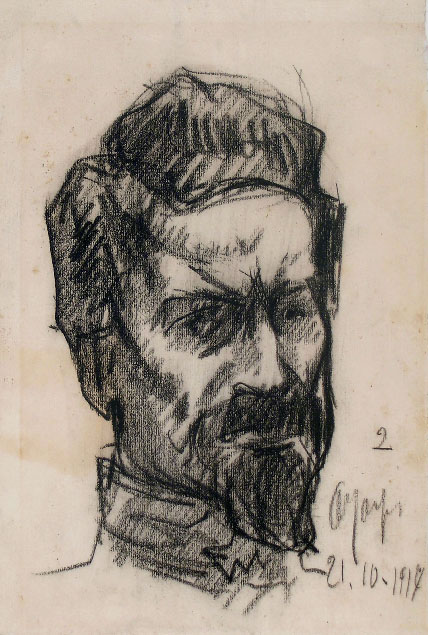 Black chalk. Signed and dated Aldo Carpi / 21.10.1917 250 x 175 mm.
PROVENANCE: Galleria del Tornese, Milan (active 1962-1966), their stamped mark on the verso.
We know another portrait of Cesare Battisti, drawn by Aldo Carpi in the same year 1917, which was reproduced in two publications celebrating the Italian patriot.

Early in his youth Aldo Carpi studied under the painter Stefano Bersani. In 1906 he joined the Brera Academy, where he met Giuseppe Mentessi, Carlo Cattaneo, Cesare Tallone, as well as Achille Funi, Emilio Gola and Carlo Carrà. Carpi partecipated in the Brera art exhibition in 1907, and exhibited at the 1912 Venice Biennale. Since then he participated in almost every Venetian Biennale. Drafted into the Italian Army in 1915, he served at various fronts of the Great War. In the 1920s, Carpi developed the style of his paintings and landscapes under the influence of Italian 19th century painters. For his works in 1925 he was awarded with the prestigious Premio Principe Umberto. In 1934 he also prepared a project for the new stained glass windows in the Duomo of Milan, the Milanese Cathedral, which however was not completed until after the World War II. In 1944, during the World War II, Carpi was arrested and imprisoned in concentration camp Gusen I of the Mauthausen-Gusen system, where he became the author of a number of sketches portraying life and death in camp and wrote a diary, Diario di Gusen. Liberated at the end of the war, he returned to Milan, where in 1956 he was awarded the state prize for his works and cultural merits.