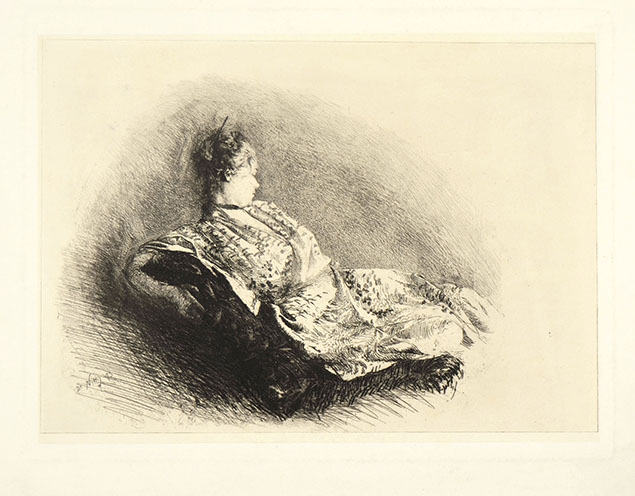 Etching and roulette, Fiorani-Dinoia 12; a beautiful luxury impression of the 4th state of the 4th, pulled up on Chine-collé on soft and thick wove paper, before the Cadard letterings.
With wide margins, in very condition
To the platemark 220 x 287 mm, the entire sheet measuring 365 x 520 mm.

Giuseppe De Nittis represents, together with Boldini and Zandomeneghi, that part of the Italian artistic milieu of the second half of the 19th century, which more clearly adopted the new poetic world of French Painting while maintaining a strong and constant bond with Italian tradition. Born in Puglia, De Nittis studied at the Accademia in Naples. The artist went to Paris in 1867 and settled there in 1868 to marry Léontine Gruvelle, who introduced him to Zola, Alexandre Dumas fils, Manet, and Degas. After a stay in Italy during the Franco Prussian War, De Nittis returned to Paris, becoming a celebrated chronicler of Parisian life and exhibiting regularly at the Salon. De Nittis' prints were all produced during his stay in Paris and were involved in the change that was taking place in the field of original etching in France: the development from a production directed mainly to an upper-class public to one conceived as pure experimentation and personal achievement.