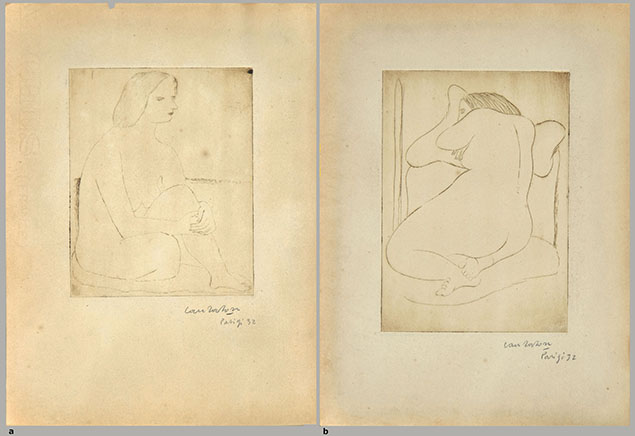 Drypoints, 1932; a) Seated female nude, 158 x 127 mm to the platemark; b) Nude woman lying down, 180 x 129 mm to the platemark.
Both printed on wove, with margins and minor faults. Both signed, located and dated in pencil at bottom Cantatore / Parigi 32.
A rare example of the drypoints engraved and printed by the artist in Paris, in 1932, under the influence of Picasso and Matisse.

Domenico Cantatore was born near Bari, into a very poor family. He was very young when he emigrated to Rome, there spending a period of self-taught, solitary formation. in 1924, he moved on to Milan. He held his first personal exhibition at the Milan Gallery in 1929. In 1932 he left for Paris. In Paris Cantatore got to know Modigliani, Picasso and Matisse who became one of Cantatore’s ideal masters. Of his Parisian sojourn there remains a note-book, and some drypoints. He returned to Milan and in 1934 held an exhibition at the Milione Gallery. He subsequently participated at the Bergamo award and exhibited at the Venice Biennials and the Rome Quadrennial. In 1940, he was appointed Professor of figure drawing at the Art School in Milan and then, as Professor of painting at the Academy of Fine Arts of Brera in 1950. In 1967 he exhibited at the Museo Civico di Monza, Palazzo dei Diamanti in Ferrara in 1983, and Montecatini in 1981.