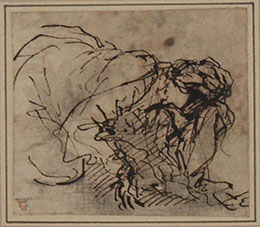 Salvator Rosa studied in Naples under his brother-in-law, Francesco Francanzano (a follower of Ribera), and the battle-painter Aniello Falcone. In 1635 he went to Rome where he also developed literary interests. In Florence, between 1640 and 1649, he enjoyed Medici patronage and formed a literary society, the Accademia dei Percossi (Academy of the Afflicted), a crossroads for literati and artists. At this time Rosa emerged as a poet, composing verse satires on music, poetry, painting; he also wrote lyrics for songs. Rosa returned in 1649 to Rome.
Rosa was impressed by both the naturalism of Ribera and the classicism of Poussin, but, being extremely independent of spirit and confident of his own genius, he allied himself with no one. Although his fame rested mostly on his work as a landscapist, Rosa preferred to be regarded as a history painter. He also chose subjects of an esoteric and philosophic nature, which he often introduced into his landscapes. Throughout the eighteenth and nineteenth centuries, Rosa's works were immensely popular and influential, especially among landscape painters.
Rosa was a skilful etcher and an extraordinary draughtsman.

THE GENIUS OF SALVATOR ROSA
Etching and drypoint
Sold
If you need more information...