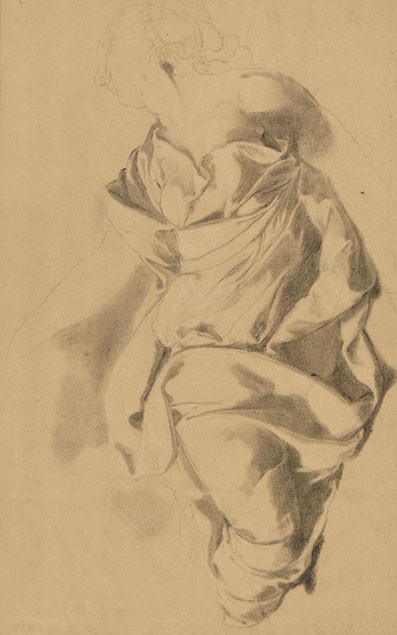 Black chalk, on laid brownish paper. 443 x 317 mm.
The drawing was made on a sheet that bears a male academy on the reverse, most likely not by Fancelli's hand.
Our drapery study compares well with another one preserved at the Minneapolis Institute of Art, inv 2012.58.156

Pietro was born in Bologna to Petronio, a quadraturista painter. Petronio moved the family to Venice in 1774 and Pietro worked with the father and a painter from Brescia called Lodovico Gallina. On returning to Bologna, he trained at the Accademia Clementina. Pietro became faculty at the Clementina in 1791, assumed the vice presidency with Antonio Beccadelli in 1793–94 and entered a period of intense activity.  In Bologna and in surrounding towns, he painted altarpieces and scenic design for the theater. Over the years he collaborated in the decoration of palaces with a number of local artists. He made curtains painted with mythological or historical themes, according to the taste of the time, for various theaters in Bologna and in Ascoli Piceno. At the Certosa di Bologna, in collaboration with other artists, he painted several tombs among which that of Martinelli, his friend and workmate.