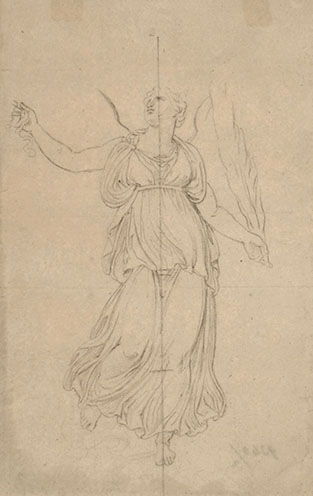 Pencil on laid paper, 173 x 111 mm.
The drawing is connected with the monochrome frieze painted by Appiani between 1803 and 1807 for the Sala delle Cariatidi in Palazzo Reale of Milan, destroyed by the bombings of 1943. The frieze is documented by a series of prints wanted by Napoleon himself, realized under Appiani’s direction between 1807 and 1816, which first complete edition appeared in Milan in 1818.
Our drawing is a study for the figure of Victory standing between the commemorative medallions for the victory of Jena and Eylau and the other one for Friedland.
LITERATURE:
Our drawing has been published in Vittoria Orlandi Balzari, Biografia di Andrea Appiani, Bosisio Parini, 2009;p. 170, fig. 32.

ANDREA APPIANI (Milan 1754 - 1817)
Appiani is one of the premier Italian neoclassical painters. He studied with Carlo Maria Giudici, Giuliano Traballesi and Martin Knoller and was inspired by Mengs and Winckelmann. Most of his career was spent in his native Milan. Although he specialized in mythological subjects and created an impressive reputation with the 1789 cycle of Psyche in the Villa Reale in Monza, he also executed scenography for the La Scala theatre. In 1791 he traveled To Rome, Naples, Parma and Bologna. Appiani frequented liberal circles and befriended the intellectual elite of his time. He was linked with the Bonapartists, and Napoleon, arrived in Milan in 1796, appointed him as his official painter in Italy. His most important works were the cycle of celebrative frescoes in the Palazzo Reale in Milan, which include the Apotheosis of Napoleon and the large Napoleonic Frieze for the Sala delle Cariatidi, now almost entirely destroyed. In 1802 Appiani was nominated commissioner of spectacles and the fine arts and was among the first artists elected to the Brera after its reorganization in 1803. Appiani's style was not strictly neoclassical. His charm and treatment of light reflect his romantic tendencies, more apparent in his portraits. He was most active as a portraitist between 1800 and 1813, producing likenesses of personalities surrounding Napoleon.
Price: 1.200,00 €
If you need more information...