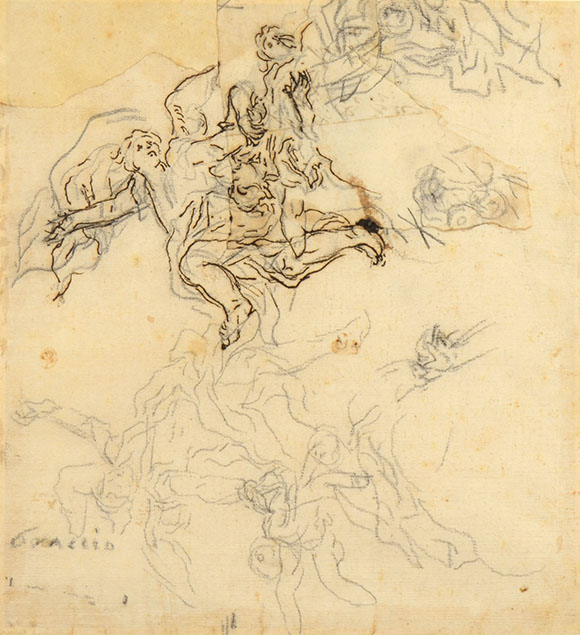 Pen and black ink over an underdrawing in black chalk. A pentimento at top right, inscribed braccio in black chalk at bottom left.
266 x 239 mm.

A sculptor's son, Il Volterrano first studied with Cosimo Daddi in Volterra and then with Matteo Rosselli in Florence. He executed his first frescoes, in 1631 and 1632, in his native town. Back in Florence in 1636, he worked in the workshop of Giovanni da San Giovanni and, after the death of the master, he was commissioned by don Lorenzo de’ Medici to create frescoes celebrating the Medici ancestry for their villa La Petraia; he finished them twelve years later.
Medici patronage continued, as did commissions from other distinguished families, making Volterrano one of the Baroque era's most successful painters in Florence. In 1652, the Marchese Filippo Niccolini, planning to employ Franceschini on the frescoes for the cupola and back-wall of his chapel in Santa Croce, Florence, dispatched him to various parts of Italy to improve his style. The painter, in a tour that lasted some months, took a serious interest in the schools of Parma and Bologna, and, to some extent, in the Romano-Tuscan style of Pietro da Cortona. He then undertook the paintings commissioned by Niccolini. These are his best works and the most well-known. One of his latest works is the fresco in the cupola of the Annunziata, Florence, which occupied him for two years towards 1683.

A PAIR OF DRAWINGS: A) STUDY OF A VIRILE FIGURE SEEN FROM THE BACK B) DOUBLE STUDY OF A MALE RIGHT LEG
Black chalk, heightened with white, SOLD
Price: 1.300,00 €
If you need more information...