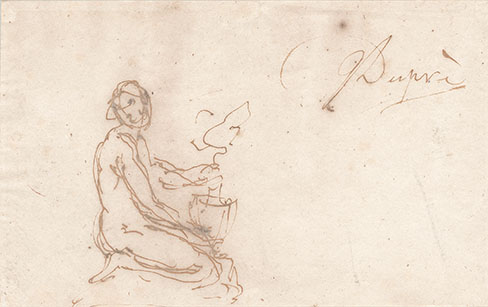 Duprè was first taught by his father, a woodcarver. As a sculptor he was influenced mainly by Lorenzo Bartolini. He took his rank as a sculptor with the life-size recumbent figure of the Dead Abel in marble (c. 1839), Pitti Palace, Florence, and followed this with the Cain (1840), also in the Pitti. A period of ill-health was followed by renewed vigour, which resulted in the brooding Sappho, considered one of his best subjects (1857), the Addolorata for S.ta Croce, Florence (1860), and the much discussed relief of the Triumph of the Cross over the entrance to the same church. In 1863 Duprè executed the noblest of all his creations, the Pietà, for the family tomb of the Marchese Bichi-Ruspoli in the cemetery of the Misericordia, Siena. This group was awarded the Grande medaille d'honneur at the International Exhibition in Paris, 1867. The San Zanobi for the facade of the Duomo, the Risen Christ for the Dupré memorial chapel, the Cavour Monument in Turin, the bronze bust of Savonarola in his cell at the monastery of S. Marco, Florence, and a number of minor works complete the list of Duprè's productions. His last work, the St. Francis inside the Cathedral of S. Rufino, Assisi, was finished by his eldest daughter and pupil, Amalia. The sculptor left a volume of memoirs of great interest to artists and critics.