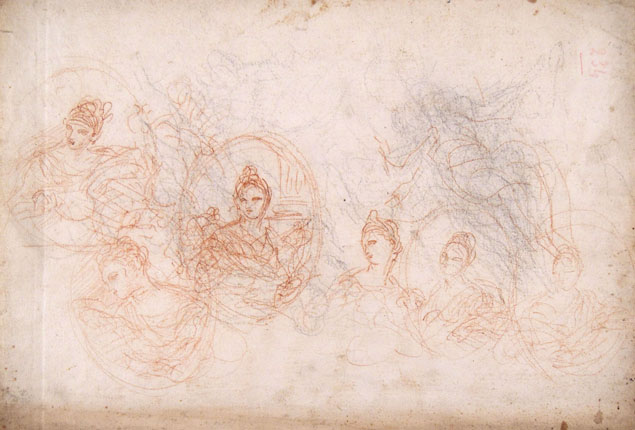 Red chalk, with traces of other sketches in black chalk; 295 x 430 mm. On the verso, in red chalk, a study of a devil seen from the back which is clearly inspired by one of the frescoes by Ludovico Carracci in the cloister of San Michele in Bosco, Bologna.
The drawing is certainly to be dated to the late 17th century.

Donato Creti entered Lorenzo Pasinelli's drawing academy in Bologna as a young boy, soon becaming the protégé of Count Alessandro Fava, whose palace was celebrated for its frescoes by the Carracci and Albani. Creti worked in Palazzo Fava for some time, drawing, painting and providing fresco decoration. In around 1700 he received a commission from the Counts of Novellara to decorate their family palace, and in 1708 he completed a large fresco (Alexander Cutting the Gordian Knot) in the Palazzo Pepoli Campogrande in Bologna. Apart from fresco decorations, the early part of his career was taken up with secular commissions for easel pictures. Throughout the 1730's and the 1740's, Creti Produced several important altarpieces for churches in Emilia-Romagna. In his biography of the artist, Giampietro Zanotti writes that Creti's drawings were highly regarded by his contemporaries; Marcantonio Franceschini, for one, praised the artist as grandissimo disegnatore.