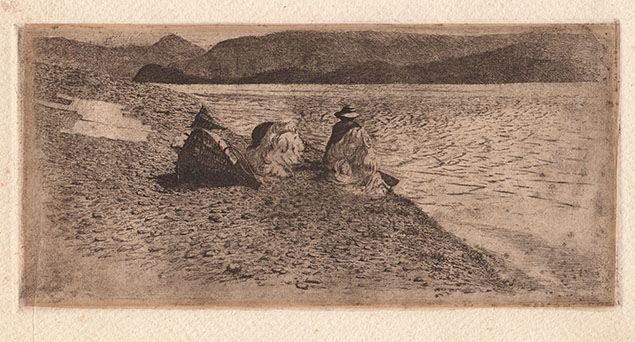 Etching. Mezzetti 346, Foglia 8. Only state. The print is of the greatest rarity. Four impressions besides this one are known; two at the Bertarelli in Milan (Mod. Cart. m. 23-16a, and Mod. Cart. m. 23-16b), one at the Biblioteca Ambrosiana (n. 21609), and another one here on my site. Our impression is fine, richly inked, pulled in sepia ink on chine appliqué on thick white wove paper, with large margins. Slightly toned. To the platemark 145 x 305 mm, the entire sheet measuring 220 x 405 mm.
PROVENANCE: The painter Carlo Bellesia (Milan 1899 - 1973). At age 17, Bellesia, host of the male Orphanage of Milan (Martinitt), was hired as lithographer by Federico Marioni (Claro 1866 - Milan 1938). Marioni, himself an etcher, opened in Milan, in the last decade of the nineteenth century, a chalcographic atelier attended by many prominent artists as Conconi, Feragutti-Visconti, Russolo, Boccioni, Wildt, Grubicy, Agazzi, Ernesto Bazzaro. The activity of Bellesia at the Marioni atelier, allowed him to gather a collection of etchings by those artists.
Lierna is in the province of Lecco in Lombardy, in north-west Italy. It lies on the eastern shore of Lake Como, about 60 kilometres north of Milan and about 15 kilometres north-west of Lecco.