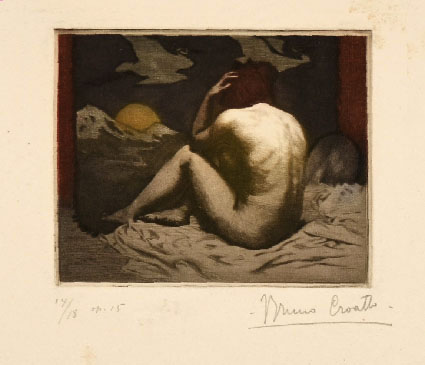 click to see a larger image
BRUNO CROATTO
(Trieste 1875 Rome 1948)
FEMALE NUDE, SEEN FROM BEHIND, SEATED IN FRONT OF AN ORIENTALIST TAPESTRY

Croatto had his first artistic training in his hometown as a student of Giuseppe Garzolini. At sixteen he went to Munich to follow a two-year course of studies held by the painter Gabriel von Hackl. Returning to Italy, he participated in 1897 at the Second Biennial of Venice. He exhibited again at the Venice Biennial in the years from 1912 to 1924. During a stay in Orvieto in 1908 he devoted himself to learning the techniques of engraving. He settled in Rome in 1925, continuing to travel and exhibited in Paris, Prague, Trieste, Athens. A retrospective was held in Rome in 1949, after his death.