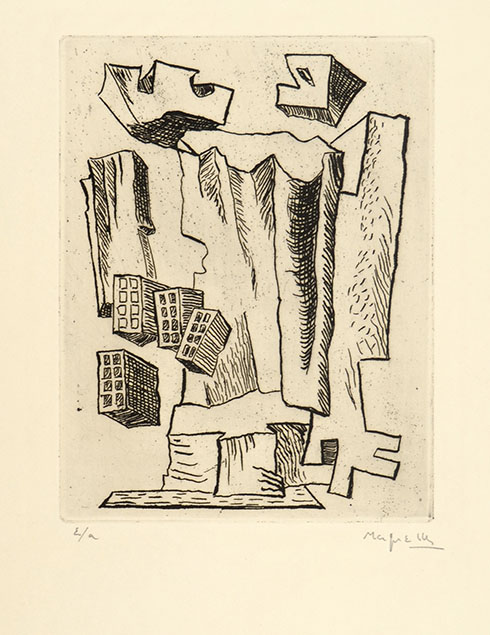 Etching, 1934. Created in 1934, the only edition was published in 1962 in Paris: fifty signed impressions and a few artist’s impressions, as our.
Inscribed and signed in pencil at the bottom margin E/a Magnelli.
To the platemark 218 x 160mm, the full sheet measuring 470 x 330 mm.

Born in a wealthy family, Magnelli started painting in 1907 without any formal art education. By 1909 he was established enough to be included in the Venice Biennale.  In 1911, he came into contact with Futurism through Giovanni Papini and Soffici, and with Cubism, before he travelled to Paris in 1914. There he met Guillaume Apollinaire and the Cubists including Pablo Picasso, Fernand Léger, and Alexander Archipenko. By 1915 he had adopted an abstract style incorporating cubist and futurist elements.
At the outbreak of the First World War, Magnelli was in Italy. Over the next few years Magnelli returned to figurative work and drifted away from the Italian avant-garde, which was becoming more supportive of Fascism, which he opposed. A crisis in confidence and uncertainty as to his artistic direction led him briefly to abandon painting at the end of the 1920s. However, an inspiring visit to the marble quarries in Carrara in 1931, led Magnelli  to the decision  to leave provincial Tuscany for Paris. This gave his art a fresh start. In Paris he joined the Abstraction-Création group and became friends with Wassily Kandinsky, Jean Arp and Sophie Taeuber. His paintings of Pierres, heavily outlined large floating rocks set in an indeterminate space, bore a resemblance both to the work of Magritte and of other Surrealists, as well as to his friend Léger's contemporary depiction of isolated objects.
Magnelli spent the Second World War in Grasse in Provence, where he worked with the Arps and with Sonia Delaunay.  Some of the group were Jewish so they were forced to hide. Despite this, the group was able to produce a number of collaborative works. Magnelli returned to Paris in 1944, where his work provided the inspiration for many younger French and Italian abstract artists.

For a precise biography of Magnelli as a printmaker, see the text by Martin Hopkinson, from his book Italian Prints 1875-1975, BMP, 2007 on the British Museum website