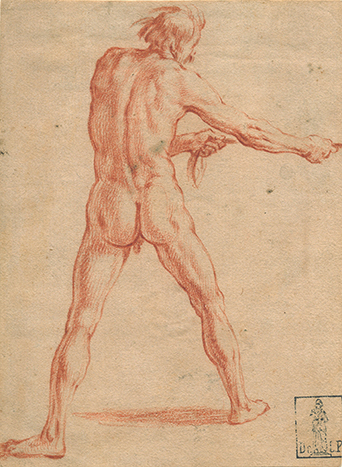 Our drawing closely connects to four other studies of standing men, kept in the Gabinetto Disegni e Stampe of the Uffizi in Florence. See here three of them. The traditional attribution of these drawings to Callot was confirmed in 1962 by Daniel Ternois (Ternois nos. from 58 to 61). Subsequently published several times *, they are a rare example of the artist's early education, which follows the naturalistic and anti-mannerist models of the Florentine Academy.

Jacques Callot went to Italy when he was in his teens. By 1608 he had apprenticed, in Rome, to engraver and publisher Philippe Thomassin, learning line engraving and copying Flemish art and late Mannerist works in Roman churches. However, Callot's real career started in Florence in 1612, when he began working for the sophisticated, elegant Medici court of the Grand Duke Cosimo II (1590-1621). In Florence he learned to combine the techniques and exaggerations of late Mannerism with witty and acute observation into a brilliantly expressive idiom. Callot drew and etched fairs, festivals, commedia dell'arte characters, beggars, courtiers, and hunchbacks. After Duke Cosimo II's death in 1621, Callot returned to Nancy, where he worked for the Lorraine court. In Nancy, Callot approached his work with a new directness and seriousness. He added poignant religious subjects, siege compositions, and sensitive landscape drawings and etchings to his repertoire. In 1633, inspired by the Thirty Years War and Cardinal Richelieu's invasion of Lorraine, Callot created a series of prints called the Miseries of War. His devastating appraisals of human cruelty and folly were used as a source by Goya, two hundred years later, for his Disasters of War. Callot's output was prodigious; more than a thousand etchings and drawings by him are extant, and some of his plates are large, featuring scores of brilliantly arranged figures. Jacques Callot was one of the greatest of all etchers and one of the first major creative artists to work exclusively in the graphic arts.

Price on application
If you need more information...