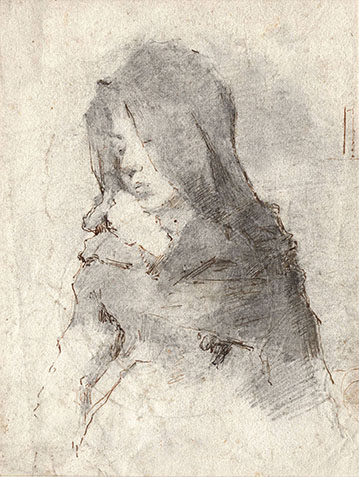 Pen and brown ink, washed in gray; on the verso sketch of the head of a boy in pen, brown ink and wash. On wove paper with watermark anchor in double circle
See here images of both sides of the drawing.
The sheet, which measures 190 x 135 mm, has been mounted in the past century with a light cardboard, bearing inscriptions in pencil referring the drawing to Giuseppe Grandi.
PROVENANCE: Said to come from the collection of the painter Filippo Carcano.
I can't find examples of similar figure drawings by Grandi, but I fully trust the attribution of this fine and sensitive double portrait Scapigliato to him. I have, in fact, as a comparison, a rare etching, portraying a young boy, which passed through my hands a few years ago and which now is kept at the British Museum (Museum number 2011,7009.5)
The comparison between the three images demonstrates they are all built with the same alternation of marks and shadings.

Grandi was born and died in Valganna, near Varese, in Lombardy. At thirteen he began his apprenticeship as a sculptor with a local craftsman, starting to work on marble. He then moved to Milan, still a teenager, in order to continue practicing with other teachers. There, in 1860, he enrolled in figure courses at the Brera. Then moved to Turin, where he remained until 1866, to continue his studies at the Accademia Albertina at the chair of sculpture held by Vincenzo Vela. After his period in Turin, he returned to Milan, where he joined the Lombard school of the Scapigliatura. He was friends with Tranquillo Cremona and Daniele Ranzoni, and with them he took on a renewed anti-academic position and shared their research on light. Forgetting the neoclassical smoothness and the lucidity of romantic art, Grandi sought to render the luministic effects of painting in sculpture. One of his best-known works is the monument to Cesare Beccaria, completed and inaugurated in 1871, the success of which brought him public and private orders. In 1881 Grandi won a public competition to create a monument to the Five Days of Milan, the start, on March 18, 1848 of the First Italian War of Independence.  The artist worked intensively for thirteen years at compositions, modelli, bronze castings. He finished his work but died in 1894, before he could see his monument inaugurated.
Grandi was also a printmaker. From the inventory made after his death by his friends Luigi Conconi and Giuseppe Mentessi, we know that he etched twelve plates, but only a few of them are known today. Nonetheless, the few surviving prints allow us to understand his genius as an etcher. All his prints were etched in 1873-74, when Grandi was deeply influenced by Tranquillo Cremona. His way of etching favors not the plasticity of the shapes but their immersion in the surrounding atmosphere. His final step to evoke this immersion was the use of a final monotypic inking on the etched plate, procedure that will be used extensively by Luigi Conconi. In this way Grandi is to be considered the inventor of the acquaforte monotipata in Lombardy.
See Amalia Mezzetti, L'acquaforte lombarda nella seconda metà dell'800, Milan 1935; pages from 81 to 84.