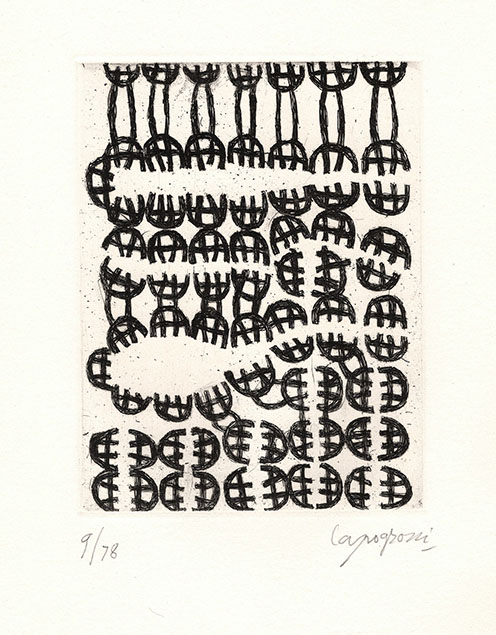 Born in a noble Roman family, that of the counts Capogrossi Guarna, Guglielmo, after obtaining a degree in law, was introduced, as an apprentice, to the studio of Giambattista Conti, a fresco painter. In 1923 he moved to the Scuola del Nudo conduced by Felice Carena at Accademia di Belle Arti in Rome. Soon he became friends with a young painter from Puglia, Emanuele Cavalli. Capogrossi made his debut in 1927 in a solo show with Cavalli and Francesco Di Cocco. He exhibited there a self-portrait, some landscapes and some views of Rome. Between 1927 and 1931 Capogrossi made repeated stays in Paris. In 1930 he was admitted to the XVII Venice Biennial International Art Exhibition. In 1931 he entered into a partnership with Cavalli, which was extended to Corrado Cagli shortly thereafter. In the 1930s Capogrossi participated to many group exhibitions in Rome, Venice and Milan and Paris, usually as associate to the so-called Scuola Romana. In 1934 he was one of the artists invited to the Exhibition of Contemporary Italian Painting at the Western Art Museum in San Francisco.
In the years following World War II, Capogrossi's work changed in favour of a more abstract style. He subsequently became one of the main exponents of Italian informal art, together with Lucio Fontana and Alberto Burri. He participated in the Premio Bergamo in 1939, 1940 and 1942, and in exhibitions such as the first edition of Documenta in Kassel (1955) and the third and fifth São Paulo Art Biennial in 1955 and 1957.