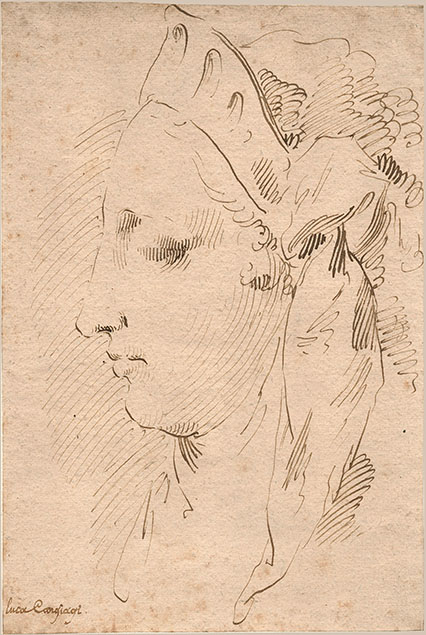 Much of what is known about Novelli's life and career comes from his memoirs, which were published posthumously in 1834. Pietro Antonio Novelli considered himself a history painter, an artist creating ambitious, large-scale works for the nobility and the Church. But today, he is best known for his fanciful works on paper.
He was trained in the studio of Giambattista Pittoni, and also came under the influence of Gaspare Diziani, Francesco Guardi and Giovanni Battista Tiepolo.
In 1768 he was accepted as a member of the Accademia in Venice, for which he painted an Allegory of the Arts. He painted decorative frescoes in several Venetian homes, and also altarpieces and decorative frescoes throughout Northern Italy; in Bologna, Udine, Padua and elsewhere. Among his patrons was Catherine II, Empress of Russia. By 1779 Novelli had settled in Rome, where he worked for most of the next twenty years. Among his significant Roman commissions was a ceiling painting for a room in the Villa Borghese.
Novelli was an inventive and versatile draughtsman: he produced designs for poetry, theater, and literature, moving effortlessly between the most different techniques of drawing. His prodigious output as a draftsman reflected both a personal interest in literary culture and the burgeoning publishing industry in eighteenth-century Venice.