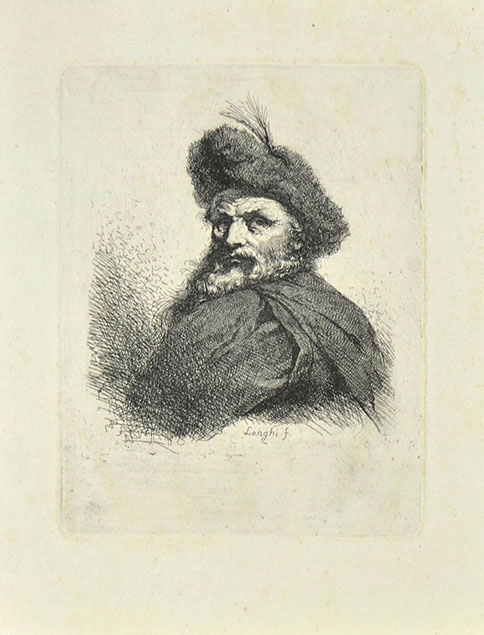 Etching, a very good impression of the final state, signed in the plate Longhi f. With margins, in very good condition. To the plate mark 160 x 125 mm.
Longhi's invention follows the tradition of the etched heads by Castiglione, Rembrandt and the Tiepolos.

A writer and an important Neoclassical printmaker, Longhi was initially trained at the Ambrosian Seminary, studying philosophy and letters. In 1786, he decided to abandon his ecclesiastical career and to devote himself as a self-taught to the technique of copper engraving. A few years later Longhi got a scholarship at the Engraving School, which was established at the Brera Academy under the direction of Vincenzo Vangelisti. Afterwards he was pupil of Giuliano Traballesi at the Brera and he tied a great friendship with Andrea Appiani, the first painter of Napoleon in Italy. Giocondo Albertolli, professor of ornamentation at the Academy, commissioned the young pupil to make a burin engraving, his first work, then published in 1792 and immediately appreciated for the naturalness of the hatching. At the end of the same year Longhi went to Rome. There he attended the printmaker Raffaello Morghen and also completed his anatomy studies. Back in Milan he also dedicated himself to perfecting and innovating the technique and tools for the art of engraving. In 1798 Longhi became professor of engraving at the Brera and in 1801 he visited Paris, staying there for two months, establishing contacts with the most famous artists such as David, Gérard, Gros, and the engraver Wille. Longhi had numerous distinguished students in the art of printmaking, we remember here Paolo Caronni, Samuel Jesi, Giuseppe Bisi, Jakob Felsing and Pietro Anderloni. He left numerous writings, the most important of which is the treatise La Calcografia ossia l’arte di incidere in rame (1830)