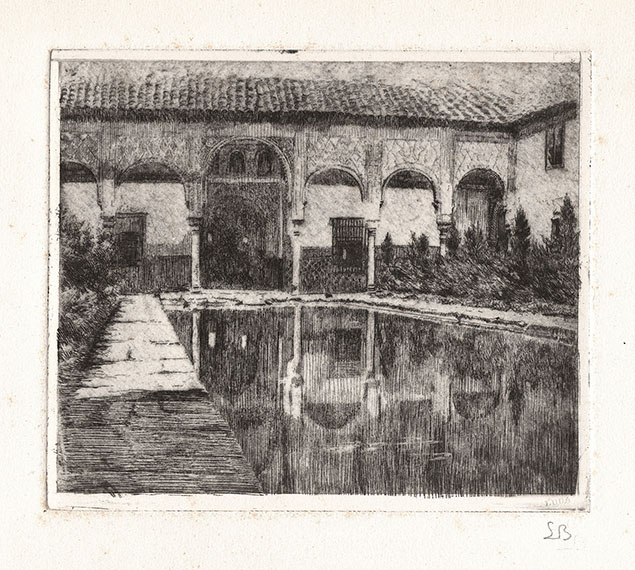 Etching, Mezzetti 57. A fine impression in black ink on thick wove cardboard. Blind stamp LUCA inside the platemark bottom right. Inscribed in pencil LB.
To the platemark 129 x 152, the sheet measuring 223 x 265
Another impression of this etching is kept at the Bertarelli library, Mod. p. 2-15a.

Beltrami initially attended the Brera, which he abandoned to follow his master Camillo Boito in the Scuola d’Architettura at the Milanese Politecnico, where he graduated in 1876. In the same year he moved to the École des Beaux-Arts in Paris which, however, did not attend assiduously to devote himself to study trips to important construction sites and to the production of etchings, initiated by his friend Luigi Conconi. He returned to Milan two years later and became a professor of architecture at the Brera and then at the Politecnico. Famous in the field of restoration, he owes much of the current appearance of Piazza della Scala in Milan. In fact, he created the most important buildings on the sides not occupied by the Theater, including Palazzo Beltrami and the  façade of Palazzo Marino. He also carried out numerous restorations of medieval and Renaissance buildings as the Castello Sforzesco in Milan. Other famous works include the Central Synagogue of Milan and the new headquarters of the newspaper Il Corriere della Sera.