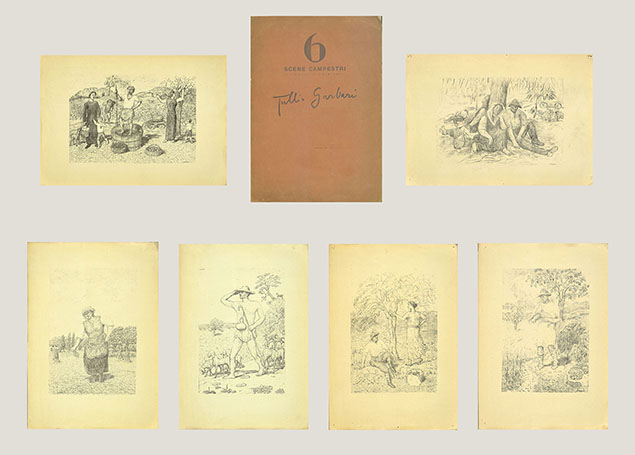 The full set of 6 lithographs Scene Campestri. Each signed on the stone, including the original folder and colophon. Published in Milan in 1930 by A.E.A (Anonima Editrice d'Arte) the edition was 240; our specimen numbered 120. Very rare because part of the series were destroyed by bombing during the Second World War. See: Renato Barilli, Tullio Garbari. Opere grafiche 1912-1931, exhibition catalogue, Galleria Il Castello - Studio d'Arte Raffaelli, Trento, 1987, no. 97.
Each sheet ca. 50 x 35 cm. Minor defects.

A student at the Scuola Reale Elisabettiana in Rovereto, in 1908 Garbari enrolled at the Accademia di Belle Arti in Venice. There he met some young avant-garde painters, known then as ribelli di Ca' Pesaro: Boccioni, Casorati, Gino Rossi, Arturo Martini, Umberto Moggioli. World War I was for Garbari a period of travails. To avoid serving in the Austro-Hungarian Army, he passed the border clandestinely and he went to Milan, remaining there for the duration of the war. During this time he suffered separation from his family and loneliness but he had also the opportunity to attend the cultural circles in Milan and, in 1917, he exhibited, together with Carlo Carrà, at the Galleria Chini. Returned to Pergine, his native city, in 1919, Garbari devoted himself, for nearly a decade to reading, study and poetry. In 1924 he moved to Trento, resuming his work as a painter, but in complete independence from the contemporary art movements. During this period he created great works of religious theme. In March 1931 Garbari went to Paris, driven by the hope of meeting the philosopher Jacques Maritain. Here he attended Gino Severini, with whom he shared artistic and philosophical positions.