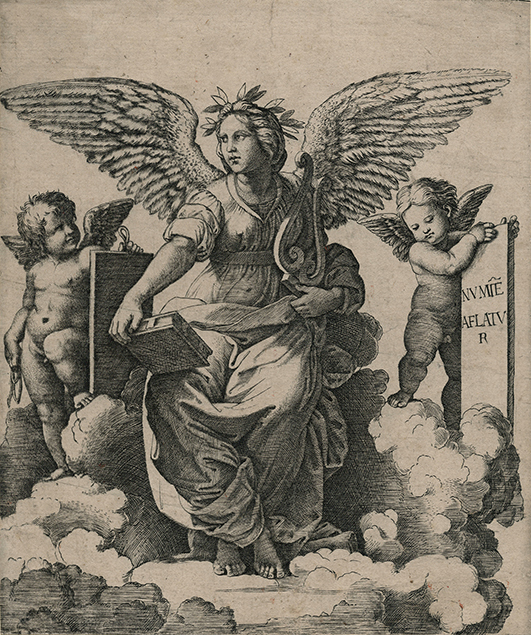 Engraving, Shoemaker 27. 177 x 150 mm
A fine impression, lightly slipped in printing on the left. A printer's crease and light traces of folds, mainly appreciable on the verso.
PROVENANCE:  on the verso P. Davidsohn's mark, Lugt.654 and another unidentified one.
Two fine impressions of this engraving are at the Metropolitan Museum (Accession Number: 49.97.135), New York and at the National Gallery of Art, Washington (Accession Number 1941.1.7).

Raimondi was the Italian Renaissance master of engraving whose production of more than 300 prints did much to disseminate the style of the High Renaissance throughout Europe, especially the work of Raphael. Raimondi received his training in the workshop of the famous goldsmith and painter Francesco Raibolini, called Francia, but his use of light and shade indicate that he was familiar with the engravings of Lucas van Leyden. During his stay in Venice (c. 1506–08), Raimondi also profited from studies of Albrecht Dürer’s energetic line and his use of crosshatching in modeling. He copied more than 70 of Dürer’s woodcuts and engravings, causing Dürer to bring suit against him in 1506.
In about 1510 Raimondi went to Rome. There his activity was almost entirely limited to reproducing works of Raphael, Michelangelo, and their followers. By 1513 he had met Raphael, who included a depiction of Raimondi in the Vatican fresco Expulsion of Heliodorus (1513). He was very successful financially and attracted a large number of pupils, of whom the two most distinguished were Marco Dente, known as Marco da Ravenna, and Agostino de Musi, known as Agostino Veneziano. Marcantonio and his pupils continued to make engravings based upon Raphael's work, even after Raphael's death in 1520. In many instances, Marcantonio would not copy the finished painting, but instead worked from early sketches and drafts. This method produced variations on a theme and were moderately successful.
Around 1524, Marcantonio was briefly imprisoned by Pope Clement VII for making a set of erotic engravings, from the designs of Giulio Romano, which were later accompanied by sonnets written by Pietro Aretino. At the intercession of the Cardinal Ippolito de' Medici, Baccio Bandinelli and Pietro Aretino, he was released, and set to work on his plate of the Martyrdom of St. Lawrence after Bandinelli. During the Sack of Rome, in 1527, he was forced to pay a heavy ransom by the Spaniards and fled in poverty. It is unclear where he stayed after his departure from Rome until his death in 1534.