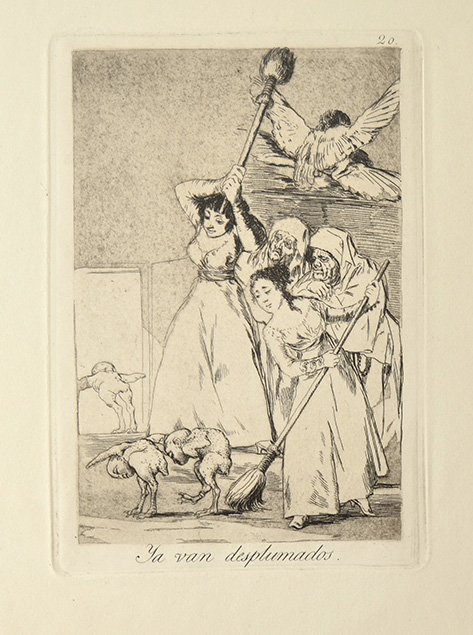 Etching, burnished aquatint and drypoint, plate 20 from Los Caprichos (1797-98); Harris 55, III, 8. An impression from the eighth edition (1905-07), limited to 180 copies, printed on very fine, thin, smooth wove paper. With margins, generally in very good condition. To the platemark 215 x 150 mm, the entire sheet measuring 330 x 238 mm.
One of the most influential series of graphic images in the history of Western art, Los Caprichos provides a satirical and damning look at 18th-century Spanish society. In the 80 etchings that comprise the series, Goya depicted the peasantry's superstitious belief in witchcraft, the arrogance of the nobility, and the widespread corruption of the Catholic Church. First published in 1799, only a few copies of the first edition were sold. Despite Goya's attempts to veil the critical nature of the series, he felt it necessary to withdraw the prints from circulation and make a gift of the plates and of the first edition's unsold sets to the King Carlos IV.