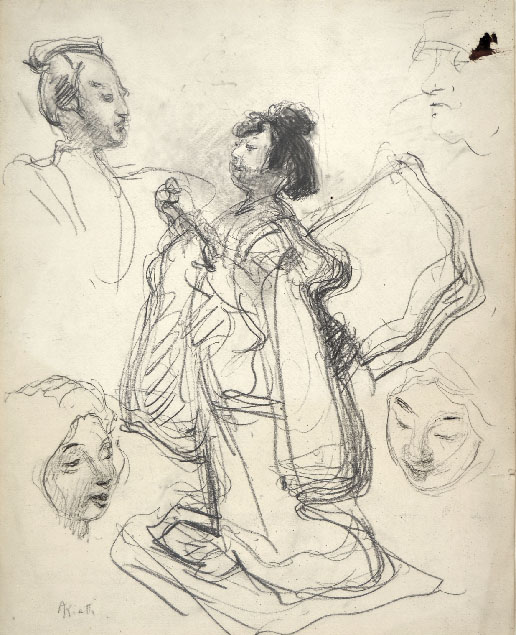 Black chalk and stumping. Signed in pencil Rietti bottom left.
On the verso other sketches of Japanese puppets in the same technique and the signature Rietti in pencil at bottom right. 495 x 400 mm.
We know Rietti's interest in Japanese subjects, an interest that stemmed from his first artistic training in Trieste. On the subject see the article by Maria Beatrice Giorio:
ARTURO RIETTI E IL JAPONISME: UNA PASSIONE LUNGA UNA VITA
In the article there is a photo of a group of Japanese puppets that belonged to Rietti; the head of one of these is sketched on the front and back of the present drawing.

Born in Trieste, Rietti was influenced by the painters Eugenio Scomparini and Giuseppe Barison. Between 1882 and 1884 he lived in San Giovanni Valdarno, painting his works under the influence of the Tuscan realism. In 1884 Rietti entered the Academy in Munich. Here followed the lessons of Franz von Defregger and Nikolaus Gysis, while Hugo von Habermann introduced him to the technique of mixed pastel with tempera, which would become characteristic of his production. In 1887 he moved to Milan, becoming a successful portrait painter and pastelist and working mainly for the Milanese high classes. Rietti, in his various stays in Vienna, Paris, Milan, Rome, Trieste, cultivated the friendship and esteem of established artists such as Habermann, Troubetzkoy, Auguste Rodin, but also Arturo Toscanini, Giacomo Puccini and Gabriele D'Annunzio, the family Casati and the Bugatti. He was a great friend of Italo Svevo.