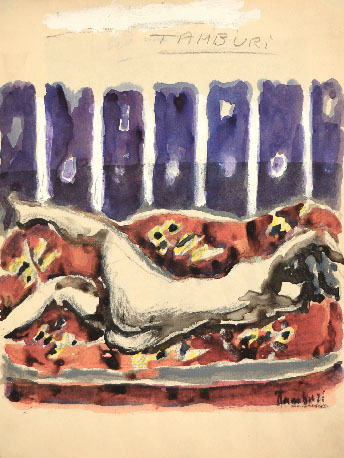 Pastels and watercolours, inscribed at top TAMBURI, signed in black chalk OTamburi; 320 x 241 mm. The subject of the drawing is the same of a print executed by Tamburi in 1961, inspired by Baudelaire's poem.

Tamburi studied at the Academy of Fine Arts in Rome. He soon moved to Paris, where he was influenced by Cezanne. He returned to Italy to take part in the Rome Quadrennial, and, the following year, at the Venice Biennale. In subsequent years, he continues to participate in both events, at the same time he exhibits in the most important cities of Italy. At the end of World War II Tamburi returns to Paris and from there extends his activities by participating in exhibitions in Belgium, France, Switzerland and Holland. Back in Italy, continues to exhibit in the most important city of the peninsula and in the following years travels the United States, visits London and then Greece and Austria. Tamburi died in Paris where he had moved in the last years of his life.

CARICATURAL SELF-PORTRAIT IN PROFILE
Pen and brush with China ink

VIEW OF PARIS
Pen and brush with China ink and brown watercolour
Price: 600,00 €
If you need more information...