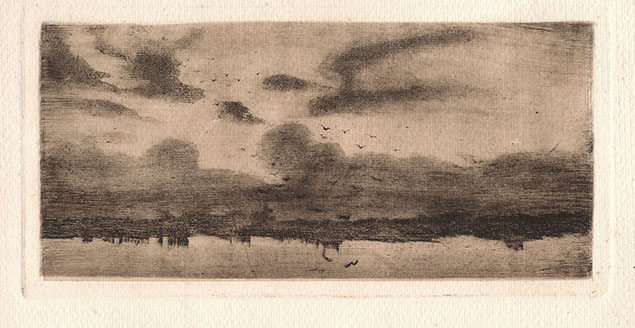 Etching and aquatint. Mezzetti 333, Foglia 2. Only state (?). The print is of the greatest rarity. Four impressions besides this one are known; one at the Bertarelli in Milan (Mod. Cart. p. 23-16a), and three in a private collection. Our impression is fine, richly inked, pulled in sepia ink on chine appliqué on thick white wove paper, with large margins. Slightly toned. To the platemark 154 x 305 mm, the entire sheet measuring 290 x 420 mm.
PROVENANCE: The painter Carlo Bellesia (Milan 1899 - 1973). At age 17, Bellesia, host of the male Orphanage of Milan (Martinitt), was hired as lithographer by Federico Marioni (Claro 1866 - Milan 1938). Marioni, himself an etcher, opened in Milan, in the last decade of the nineteenth century, a chalcographic atelier attended by many prominent artists as Conconi, Feragutti-Visconti, Russolo, Boccioni, Wildt, Grubicy, Agazzi, Ernesto Bazzaro. The activity of Bellesia at the Marioni atelier, allowed him to gather a collection of etchings by those artists.
According to Patrizia Foglia the etching depicts a coastal area in the North of the Netherlands: the scholar dates the print late eighties.