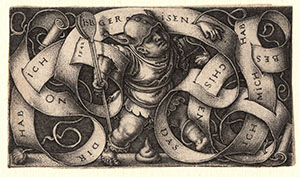 Born to a family of artists, Hans Sebald Beham was a prolific printmaker. He focused on tiny engravings, placing him in the German printmaking school called the Little Masters (Kleinmeister). Beham also worked with larger woodcuts and designed playing cards, wallpaper, coats of arms, and patterns for other artists. The Kleinmeister also included Beham’s younger brother, Barthel Beham (1502–40), and Georg Pencz (c. 1500–50). All three artists, noted for their brilliant work on extremely small copper plates, grew up under the influence of Albrecht Dürer’s late classical style. It is likely that they worked in Dürer’s studio. In 1525 the trio was banned from Nürnberg for independent religious views, but not for long. Later Beham moved to Frankfurt am Main.
Alison G. Stewart conducted an in-depth study of Sebald Beham's life and artistic activity. Published in the Journal of Historians of Netherlandish Art (Vol 4.2 2012), it is available online