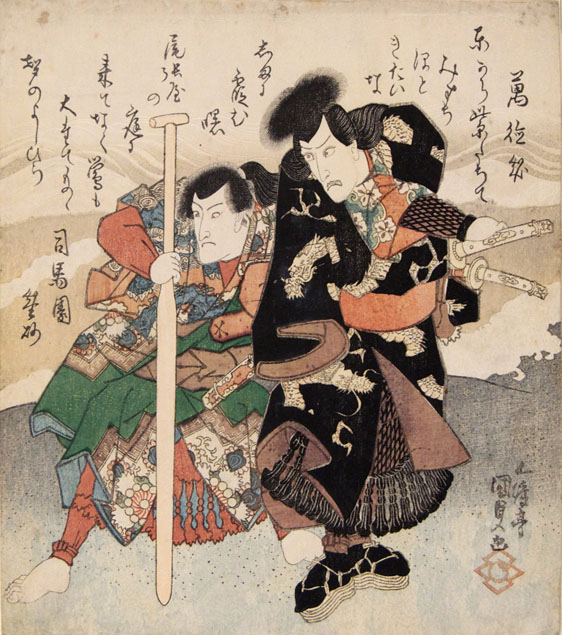 Colour woodblock print, shikishiban surimono. Signed Gototei Kunisada ga, artist's seal which includes the toshidama ring. Fine impression, with extensive use of karazuri (empty printing) and tsuyazumi (gloss black). Good colour and condition; 218 x 192 mm.
For another impression of this print in Dublin see: Roger Keyes, The Art of Surimono: Privately Published Japanese Woodblock Prints and Books in the Chester Beatty Library, Dublin; two volumes, London and New York, 1985; cat. no 238, illustrated in colour.
The category of Japanese woodblock print known as surimono, meaning literally printed thing, was distinguished from most of the other prints in several ways: surimono were privately commissioned and distributed rather than being issued by a commercial publisher; they were printed on thicker paper, which facilitated special printing effects; and they were consistently adorned with poems that played games with the links between verbal and visual imagery. By comparison with the usual commercial ukiyo-e prints, surimono were a luxury that displayed the wealth and taste of the individual or individuals who commissioned them. For the artist they represented high-profile commissions executed in close consultation with the leading connoisseurs, poets and actors of the day. Most surimono prints were kyoka surimono, commissioned by members of the large kyoka (crazy-verse) poetry groups, who would swap surimono at poetry gatherings. Other individuals commissioned surimono as private greeting cards or mementoes of particular events for distribution among their friends or clients. They were often produced at New Year, with suitable poems auguring good luck accompanying seasonal spring imagery or symbols of longevity. Kabuki actors commissioned surimono to distribute among their sponsors and fans. The fans themselves also commissioned surimono to extol the virtues of their favourite actor.