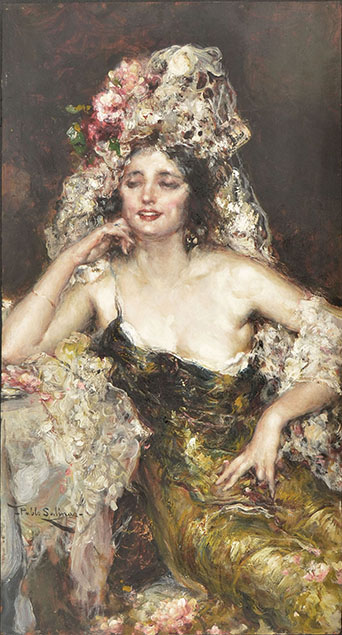 Juan Pablo Salinas was born in Madrid and studied at the San Fernando School of Fine Art, where a generation earlier Goya had worked. In 1886 he moved to Rome to join his brother Augustin Salinas, who was also a painter. They became part of the Spanish colony of artists resident in Rome. He also attended classes at the International Circle of Fine Art and the Chigi Academy. Salinas spent most of his painting career in Rome. Most of his work was of 18th-century costume pieces within luxurious settings, ornate church interiors and popular genre scenes of Spanish and Italian life. Salinas was particularly admired for his rich colouring, minute detail and fanciful brushwork. The detailed interior backdrops were often drawn from items in his fine collection of antiques and object d’art.