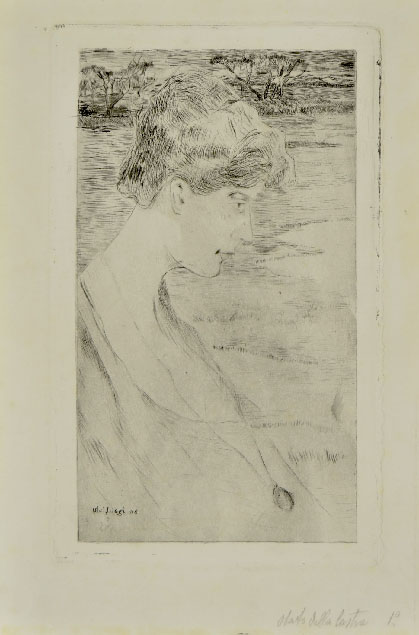 Luigi Levi, who signed his paintings as Ulvi Liegi (an anagram of his real name), was born in Livorno in a wealthy Jewish family. He got initial art education in Livorno, and then he moved to Florence, where he studied in the Academy of Arts under Adolfo Tommasi, Carlo Markò the Younger, and Giuseppe Ciaranfi. While in Florence, he became friends with many artists from the Macchiaioli group, first Telemaco Signorini, and later one of the leaders of the group, Giovanni Fattori. Liegi first exhibited his paintings in 1882, and got positive responses. In the 1880s, he painted in the style close to the Macchiaioli, but later started to paint in a style close to impressionism. In 1886–1888 Liegi visited Paris, where he studied works of impressionists, and London; in 1889, two of his works were exhibited in the World's Fair in Paris.
In 1884, Liegi sent to Turin three landscape paintings. On 1887  he exhibited in Venice and in 1888, he exhibited in Bologna. From 1890 to 1908, Liegi lived in Florence, but often spent summers in Liguria. In 1908, he moved to Livorno, and stayed there until his death in 1939. He was involved with the Postmacchiaioli, of which he and Llewelyn Lloyd are considered to be the best known representatives. In 1918, Liegi had his first personal exhibition, at the Galleria Mario Galli in Florence. Since 1920, he was the president of the Gruppo Labronico and promoted Livornese art. He died in 1939 in extreme poverty.