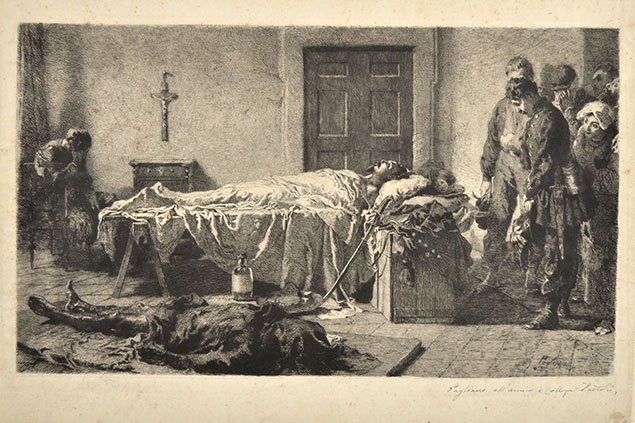 Etching, after the celebrated painting by the artist dated 1884. Mezzetti 382. Signed Pagliano in the plate. An extremely rare artist’s proof before the letters, richly printed in black ink, signed and dedicated in pen and blue ink Pagliano all’amico e collega Fattori.
To the image 283 x 486
The full sheet measuring 357 x 520

A painter, etcher and an active contributor to the Italian Risorgimento, Eleuterio Pagliano studied at the Milanese Academy of Brera, to which he enrolled in 1836, at eleven years, on Sabatelli's recommendation. A patriot, in 1848 Pagliano joined the popular revolt against the Austrian garrison in Milan known as Le Cinque Giornate and in 1849 he fought under Garibaldi in Rome. In the early fifties he met and became friends with Domenico Morelli, whose anti-academic researches influenced Pagliano's painting, thematically oriented toward the historical and patriotic subjects. After 1851 he also painted many portraits, reinterpreting the traditional style of romantic portraiture. In 1859 Pagliano volunteered to fight with Garibaldi in the Second War of Independence, as a lieutenant in the Cacciatori dell Alpi, and after this experience in his paintings depicting military episodes he tried to convey with immediacy their rawness. In his later depictions of Risorgimento episodes Pagliano also succeed in avoiding excessive rhetoric, as in the body of Luciano Manara visited by soldiers, executed for the Esposizione Nazionale in Turin in 1884. Pagliano treated skillfully, as a painter, other nineteenth-century themes and was also an excellent etcher and watercolourist. He participated in important exhibitions throughout Europe and won prestigious awards.

AN ABRUZZO FARMER
Etching
Sold
If you need more information...