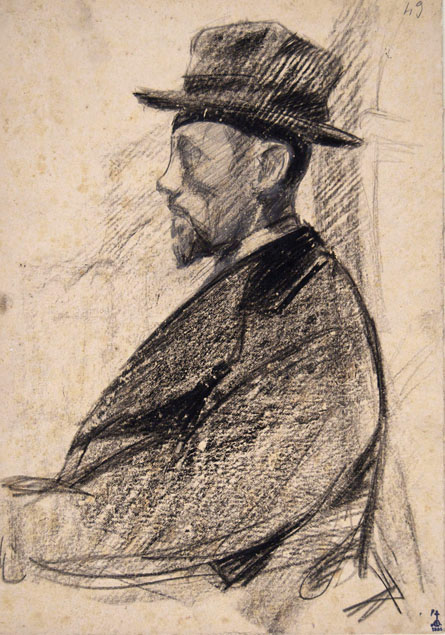 click to see a larger image
LIBERO ANDREOTTI
(Pescia 1875 - Florence 1933)
PORTRAIT OF A MAN WITH BEARD AND HAT, IN PROFILE

Black chalk and graphite on a thick cardboard. On the verso a study for the same portrait. 328 x 230 mm.
PROVENANCE: the artist's heirs (their stamped mark bottom right).

Libero Andreotti studied in Lucca, Palermo and Florence. He arrived in Milan in 1906 and was immediately promoted by the art dealer Vittore Grubicy de Dragon. This association with Grubicy did bring the Andreotti's name to the attention of leading artists and also to the critical establishment, as well as to the art market. His works during this period were small sculptures commercially successful due to their treatment of fashionable, ephemeral or mildly erotic themes. In 1909, Andreotti arrived in Paris where he remained until 1914, deeply influenced by the sculpture of Medardo Rosso and Rodin. In 1914, with the outbreak of war, Andreotti returned to Florence. Here he participated in the cultural life of the city and was appointed professor of sculpture first at the Accademia di belle arti and then at the Istituto di arte decorativa. In 1919 he created the monument to Vamba for the cemetery of San Miniato, in Florence. In Tuscany he turned back to traditional examples, primarily 15th-century sculpture.
In these years Andreotti began a strong and fruitful friendship with Ugo Ojetti, the most powerful art critic of the period. Spurred on by Ojetti,  Andreotti accepted the commission for the Roncade War Memorial in 1922. Two years later he started work on the memorial in Saronno. The third important commission was the Monumento alla madre italiana in Santa Croce, Florence (1924-1926). Between 1926 and 1928 Andreotti worked for the altar of the Arco alla Vittoria in Bolzano, designed by Marcello Piacentini. In 1928 he made a plaster, never cast in bronze, titled Ritorno dopo la Vittoria which was displayed in the courtyard of the Milanese Sacrario dei Caduti at the latter's inauguration. Between 1930 and 1931 he sculpted the statues adorning the  Edicola Borletti (by the architect Gio Ponti) at the Monumental Cemetery in Milan.